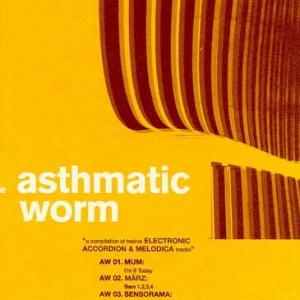 Every now and then you run across a compilation that has more to offer. Not the usual style or mood related selection of tracks, not the kind of stuff that you already know from one or the other collection. Sometimes you find one that actually surprises you with a pretty unusual angle, an unexpected topic, a selection of tracks that is a little off the beaten track.

This one has all of that, and even nice art work and a great title. The asthmatic worm – as you will probably know – is a funny expression for an accordion, a melodeon, bandoneon. Anything that primarily has knobs and keys and is using air that is drawn in and out to create sounds, and that sounds like asthmatic breathing when none of the knobs or keys are pressed.

Some people call it squeezebox, and on this collection we get twelve fine pieces of music that feature one, with the important addition that we are not talking about the expected stuff, French chansons or traditional music from countries that have a lot of squeezebox heroes. No, it’s electronic music we are talking about, and that’s a pretty nice twist that still gives us a lot of variety.

The list of artists featured on this compilation should already tell us that we are in for a treat:  Múm, Doctor Rockit, Burnt Friedman, Gonzales, Dntel, Gotan Project – that’s a pretty elite crowd, and the other six artists are more than just padding the precious package.

It’s impossible not to love Múm, that eccentric little band from Iceland that always sounds like they are constantly on some magic little drug that keeps you nice and playful. Sometimes they sound like they are making music for a super fortunate and imaginative little kid, and their “I’m 9 Today” might have been composed for such an occasion. Totally lovely.

Interestingly, März follow with a selection of instruments and elements that aren’t so far removed from what Múm used, but end up with a very different result – a happy little piece of minimal, super simple melody that will make every pessimist frown within half a second. “Bar 1, 2, 3, 4” features some random German speech samples, single words in a loose associative succession. The boss is not in the office, they say in the end. The way it sounds he’s taking the day off.

There is nice and pleasant stuff you might not remember all too long but will be just fine in the background wherever you are sitting and having a glass of wine, like Sensorama and their “Where The Rabbit Sleeps”, and nicely eccentric bits like the super French “Sans Toi” by a formation named Hey – almost sounding a little like Les Rita Mitsouko.

Totally unavoidable on this compilation: Doctor Rockit a.k.a. Matthew Herbert and his famous “Café de Flore” – funny how a Brit follows some French people and somehow sounding more French than them. Looking back from 2021 we might question the need for more than eight minutes, but it is a true classic anyway. The only possible follow-up for this is the equally unavoidable “El Capitalismo Foraneo” by Gotan Project – no idea whether Piazzolla smiled or frowned in his grave, but it still is a very fine piece of music.

That’s enough hits for one compilation and it’s time for the more surprising selections – like Cologne electronic experimentalist Burnt Friedman and his legendary partner Jaki Liebezeit, former Can drummer, who sadly passed away in 2017. “Rastafahndung” (a German play on words – Rasterfahndung is the German word for computer assisted profiling) is one of the finest tracks on their first album “Secret Rhythms”, and in spite of the title of the track it is just slightly reggae based, just like the accordion element is a shy rhythmic addition. Nice selection here.

In a nerdy way, it makes sense to follow this up with Uwe Schmidt a.k.a. Atom TM – after all, he teamed up with Burnt Friedman for several albums on Ninja Tune and Nonplace as Flanger. His contribution registers as “Pole vs. Pentatonic Surprise” and it makes me wonder whether Uwe Schmidt got lost in his endless tangle of aliases and track titles. Pentatonic Surprise is half a title here, the name of an album by the Roger Tubesound Ensemble (Schmidt again), and also registered as a further alias of Schmidt. It’s easier regarding the first half of the title – this is just Pole. Stefan Betke. It does sound like him too, nicely dubby stuff with a slightly distorted accordion echoing in endless space on the side of a superbly deep bass. Slick.

The question that Markus Nikolai is asking next – “Would Grandpa Like It?” – can safely be answered with a polite no. Grandpa wouldn’t appreciate the track’s experimental nature, would question the need for such a lot of echo space and those strange stereo effects. That’s unless grandpa has been raised on more abstract forms of music. We don’t know. But if you let this album play during a dinner with friends, it might just stick out from the rest in a way that not all of your guests will find inspiring.

Nikolai’s piece is an exclusive and previously unreleased contribution, just like Dntel’s “Your Hill” – another plus this compilation is collecting, even if it doesn’t aim to please right from the start. But if you get over the first bit, you might even be reminded of “The Dream Of Evan And Chan”.

We will even add another plus to the list – the track sequence on this album is really clever. As much a we enjoy the more deeply electronic selections, we do yearn for something a little warmer at that point – and Wechsel Garland delivers just that, waltzing through a nicely romantic and playful song, a real treat, just like the closer by the fabulous Gonzales which is aptly called “Melodika” – a two minute epilogue that conjures up the slightly sad happiness of tourists leaving the seaside after the holidays in Jacques Tati’s “Monsieur Hulot’s Holiday”.

This is a really nice example of how you create a coherent, harmonious and stimulating compilation. Great artists, nice tracks, an interesting topic and a really clever way of putting the tracks in sequence. Really well done. Merci.