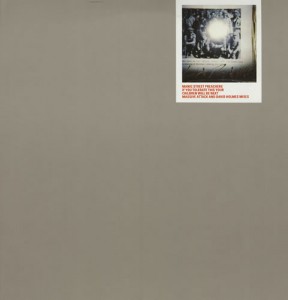 This 12″ never hit the stores. It’s a promo. As a single, it was only published on CD. Needless to say that this was not an option for me. The need for CDs is close to zero, the CD single is probably dead already. I was lucky to find this precious little thing in a second hand store, especially since it features a mix that wasn’t included on its digital brother (or sister).

It’s an instrumental version of Massive Attack’s remix of this instant classic, and it’s hard to say no to an additional display of genius from them. Even if it is a pretty mean piece they turned this thing into, no matter whether you listen to the one with the vocals or the one without. It was created when they were busy working on their “Mezzanine” album that featured pretty heavy use of guitars, louder and more dominant than ever before or after. And for this remix, they let them do their thing even more intensely.

Robert del Naja and Neil Davidge must have thought that the Preachers’ guitars were a little too zu nice, so took John Harris along who was already working on the guitar parts on “Mezzanine”. He supplied some pretty vicious, almost brutal attacks on the track, loud and distorted. And instead of the classic drums on the original track the guys supplied some stripped down electronic beats.

The result is quite disturbing, and as in so many other remixes you will find a hard time to recognize elements that were featured in the original track. Even on the one with the vocals. It’s hard to say whether this remix is something like a radical brother of the message that is conveyed, or whether it separates vocal and instrumental elements. Which is why I prefer the instrumental version, even if it doesn’t have much resemblance with the original.

If the Massive Attack guys are the bad cops, you will definitely find the good cops on the other side (isn’t it so much nicer if music comes two sided?). It’s David Holmes, supported by Tim Goldsworthy und Phil Mossman. They give us a really lavish ten minute serving, “The Class Reunion Of The Sunset Marquis Mix” – I tend to suspect that Holmes deliberately gave the endless title an almost equally long remix title.

Just like my favorite Massive Attack version, this remix doesn’t make use of James Dean Bradfield’s vocals – Holmes prefers to let a guitar take his part. Clearly nothing even close to what John Harris did, but rather one that elegantly fits the sound concept of the Manic Street Preachers. Holmes is generally much closer to the original – and still, we can clearly hear and feel his handwriting in this mix. It fits nicely between his second Album “Let’s Get Killed”, and the third one, “Bow Down To The Exit Sign” both regarding style and timing.

It’s an interesting blend. While the original is at home right in the middle of British alternative rock, the Holmes remix is very much at home in his domain, the intellectual side of downbeat, with a touch of stylish nostalgia. And yet, these ten minutes sound like an elegiac homage to the harmonies  and melodies of the track. The beat is a little less stiff, loosened up with the use of cymbals and jingle rings, the bass is confidently carrying everything – and on top of everything Holmes celebrates everything that makes “If You Tolerate This” a great piece of pop music. And if Holmes hadn’t won us over after the first five minutes, the introduction of strings at that point definitely does the job.

Holmes and friends are able to keep us listening over course of the whole ten minutes, cleverly inserting some nicely crafted breaks, only to rebuild the piece bit by elegant bit every time. Which tells you that Holmes is not just a great composer, producer and remixer, his talents in arrangement are just as impressive. One of the finest remix I have heard in a very long time. Good cop beats bad cop, by a margin.