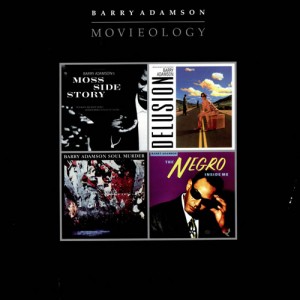 I vividly remember when I discovered this EP at a second hand shop in Frankfurt. And how I was thinking, funny how Barry Adamson always seems to be an interesting figure and somehow his stuff usually doesn’t enter my collection after all.

It’s not like he didn’t have an interesting and impressive background. Active since the beginning of the Punk era, co-founder of the band Magazine. Later, he was a main contributor to Visage, you know, Fade To Grey and all. He was also a member of Nick Cave’s Bad Seeds for three albums until he finally started his own thing on Mute and working on soundtracks. Among his credentials is music for films like Natural Born Killers, Lost Highway and The Beach.

Which sort of brings us to this EP. Sort of – because none of the tracks that are featured here come from his soundtracks. All five of them can be found on three of his albums – and they all are connected to the movies in one way or another. Small but essential difference.

“The Man With The Golden Arm” for example is a track from Adamson’s  “Moss Side Story” album which is a fictitious motion picture soundtrack, arranged and composed as if it was one, only that there is no film for it. To complete the confusion: this is one of three bonus tracks that were added to the CD edition of the album and it wasn’t actually composed by Barry Adamson – it’s an Elmer Bernstein composition from a film with the same name that was released in 1955. In short: a bonus track from a soundtrack of a film for an album that is a soundtrack without a film. Oh, and the title itself – a lavishly arranged burlesque piece that received a bit electronic treatment.

It’s obvious where the inspiration for “007 – A Fantasy Bond Theme (Dance Version)” came from. This was actually the track that made me buy this EP in the first place. It’s on his “Soul Murder” album, and I totally loved it when I first heard it. It’s the Bond theme turned into a classic Reggae tune, and the idea is that James Bond is actually a little boy from Kingston dreaming of being a secret agent. Lovely, really. What I didn’t see when I grabbed the vinyl and added it to my stash was the little extension that said “Dance Version”. This version received some additional treatment from Ivor Wimborne und Atticus Ross to somehow make it danceable. And yes, the guy that works with Trent Reznor. Back in those days he was still part of Bomb The Bass. Oh, and the remix… I guess for its day it was pretty okay, but even then I would have asked: why?

The remaining three titles are from “The Negro Inside Me” from 1993, a solo effort on which he dared to cover “Je t’aime (moi non plus)”. “The Snowball Effect” is a wild mix including over-eager nineties dancefloor, some Hip Hop elements, a snippet from an answering machine and some decent solo work on flute and organ.

“Busted (The Michaelangelo Version)” is a kind of collage that features lots of pretty well known Hip Hop bits, a truckload of sound files, Dragnet kind of horns and a police car. Full stack of instruments with thick drums and bass, brass and organ, even sounds from an arcade hall. You do get to understand that back then more was more, this thing is almost bursting at the seams.

Finally: “Dead Heat”, dragging along with a slow, heavy beat, ominous synth horns and a crime theme. Again, very nineties, plenty of synthesizer action that sounds outdated for our ears today – but who knows, the decade will probably come back in fashion at some point. For sure.

After listening to all five tracks I kind of have an idea why my only Barry Adamson moment was when I first heard the Fantasy Bond Theme (the original non-dance-version). His production style did not really age well, and I am not sure if a nineties revival would help.