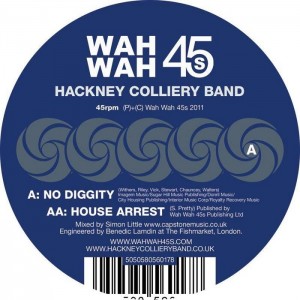 It’s an interesting development that year after year the party landscape is increasingly serving brass bands to provide a different approach to the usual turntable based entertainment. A lot of times they do what American college marching bands have been doing for quite a while already – adapting soul, rock and pop hits to fit their purposes. People simply love it. And since 2008, the Hackney Colliery Band – featuring no less than seven brass players, a drummer and a bass player – is busy providing their share of cover versions.

Luckily, they tend to be a little more innovative than most, easily on par with the more famous Hot 8 Brass band. On this lovely little 7” they are sending the good old Blackstreet hit “No Diggity” through the hooters, and they are doing it really well. For that occasion they even added more horns to the band. I guess you can’t have too much brass.

The potential disadvantage of such a big brass band – being a little more on the stiff side, especially compared to such an R’n’B track – is actually what makes it so appealing, and the tons of energy that this ensemble is providing is more than enough to make up for the lack of slickness. For good measure and in the absence of singing they simply throw in some really energetic and inspired solos, even keeping it going when the drum break is up. This is a ton of fun.

And those were the days when the B-side was some unloved piece from the back of the shelf. Not on this one. “House Arrest” may sound like it’s some party hit from the early days of House – but it is much closer to a really nice Balkan party classic, and not a cover version at all – it’s a Hackney Colliery original. Not necessarily a revolutionary idea, but it creates just as much joy as the A-side, it’s a lovely idea and really well produced (no wonder: Benedic Lamdin of Nostalgia 77 fame did the honors). Can’t wait to put this on when the next party is approaching boiling point. Cheers!