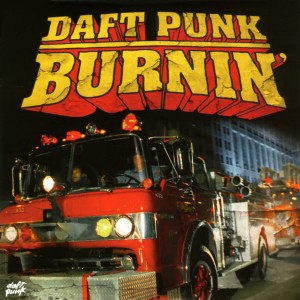 One of a whole bunch of burners from Daft Punk’s magnificent first album. How much of a heavy hitter this album was can already be deducted from the elite selection of remixers on this 12″ – German house meister Ian Pooley who was at the height of his fame at that time, Scottish Soma label wizards Slam, and the utterly indestructible house legend DJ Sneak from Chicago. Back in 1997 you couldn’t have hoped for bigger names for your remixes, and Daft Punk gave them plenty of opportunity, filling more than 38 minutes on a 12” that was almost as long as an album.

Remembering all those French House bangers that were crafted by Thomas Bangalter and his friends before Daft Punk was established, “Burnin'” sounds like the logical next step. All the way house, electronically enhanced, reduced to just the necessary elements to create maximum forward motion, only decorated with a few clever loops and synths to underline both groove and texture.

In this regard, “Burnin'” is almost exemplary in the way Daft Punk brought the best of Chicago to Paris and turned it into something so unique that any attempt to copy the formula failed miserably. They never shied away from almost endlessly repeating the parts that worked best, of from letting their synth stabs make our ears bleed while we’d still be smiling and moving our butts.

If you look at it that way, it does take the best of remixers to take this almost extreme material and give it a new twist without coming up with something that is either bland or hard to bear. Ian Pooley tried it by being a little less radical, focusing on the track’s excellent bass line and letting it roll a little more smoothly, turning the French House bastard into a slick dance floor tool. No more, but certainly no less.

Slam, on the other hand, chose to be a bit more radical. Their rhythmic framework is a minimalist 909 skeleton with some sparsely applied samples, a reduced bass line and some nice edits of the Daft Punk sound universe. Short and nasty sweeps become a little more extended and a little more digestible, and the bass gets filter treatment during breaks. None of this is a bad idea – but it doesn’t blow you away either.

Being the true house legend that he is, Sneak gets to supply two mixes instead of one, the “Main Mix” and the “Mongowarrior Mix” – almost 20 minutes of pure Chicago, with the typical straight, grooving Sneak signature beats, slightly shuffled snare and a small dose of Latin flavor. That’s how we know and like him. The “Mongowarrior Mix” knows one direction only, forward, always forward, straight as an arrow, taking the long way to the slow and purposeful insertion of the bass line.

That’s what Sneak and Daft Punk definitely have in common – the joy of repetition and variation, having fun with a nice little loop, and keeping their focus on driving things forward. And while his remix colleagues seem to shy away from that evil synth sweep, Sneak grabs it, takes it out of the immediate foreground and makes it part of the groove. You might at times ask yourself if this leads to something specific at some point or whether this is “just” a ten minute house exercise – but who cares, it’s a rigorous exercise and the purpose is found in itself.

Not surprisingly, the “Main Mix” is a little less warriorish, but somehow that doesn’t make it more charming. This is a pretty serious affair, with an even heavier beat, decorated with whatever Sneak found helpful in the original piece. Nine minutes of relentlessness, taking no prisoners at any point.

Our definition of what’s burnin’ has changed a bit over the years – but this is still a classic, and it’s never a crime to keep a Daft Punk 12″ in your collection.