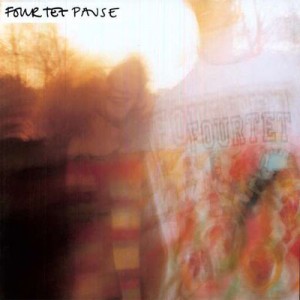 Some folks are just born to make music. They can’t start early enough, create remarkable stuff from day one, keep evolving and building a community of fans, they are just all music. Kieran Hebden is one of them, without any doubt. First recording deal at age 15, first remix on a Warp anniversary album, and from there it was just always upward and forward.

When “Pause” was released in 2001 it was already his sixth album. Four had been released with his first band Fridge, as well as his first album as Four Tet – “Dialogue”. But it really was this album that started his career –  “Dialogue” was an attempt to create a unique style based on Hip Hop beats and Jazz samples, still a little too demure and heady.

Things definitely changed on “Pause” towards a much more playful and approachable – with the magic trick being that he kept an aura if introversion, someone that could work on sounds and song ideas forever in his studio without ever running the risk of getting lonely. Plus, the mix of elements that he came up with for this album seems a lot less constructed, much more harmonious and coherent. His approach matured from quoting to blending, from using things to embracing them. Long before anyone began quietly talking about a Folk revival he was already working with acoustic guitars, folk-ish harmonies and a sound universe that seemed a lot more natural than most of what was published in what back in those days was called downtempo. He just took one step and was immune from being shoved in this category.

Compared to what Hebden was going to release on the next two album, “Pause” is almost straightforward, more linear – but he already had a considerably different attitude towards the things, topics, images he was conjuring up with his music. Instead of talking about something he would rather let us feel what he wants to put across. Like on “Glue Of The World” for example is as dewy and unwound as a Sunday morning in the meadows. When everyone still wanted to be cool and slick he was already evocative and real.

On the way to “Pause” he seems to also have found his love for little bells and chimes and other things that jingle, jiggle and ring, and a tendency to let them do their thing with a playful disregard of what the beat is doing. You can feel it, he doesn’t just put them in sequence and then loosen things up with a funky little feature of a sequencer. It’s manual and deliberate, the rhythm more a suggestion than a rule. As if he would let the sounds be where they want to be. “Twenty Three” is a great example – it’s not about the beat, it’s about perception and imagination.

Every now and then, short pieces that work like nicely connecting interludes explore the opportunities of interplay between music, life and play, incorporating all kinds of sounds from offices to children playing, or telling a tiny little story as on “Leila Came Round And We Watched A Video” – a touching piece that tells us they were definitely not watching an action movie or a thriller. Simply lovely.

“Untangle” makes sure that we don’t fall asleep in front of the TV – a slowly grooving piece of… what? House? Minimal? Untangled, uncluttered and almost straight if it weren’t for the harp-like theme that again has its own idea of what’s straight. Might have just been the moment when Mr. Hebden discovered his love for danceable stuff – a passion that would grow considerably over the years.

“Everything Is Alright” is almost a signature track here, with a rhythmic structure that is unique not due to its intricateness but rather due to the use of elements – no one is able to let big, almost kettle sized drums sound so playful and light. Yes, in spite of the big drums, everything is alright, and the guitar theme is a testament to that.

The one track that somehow doesn’t work (at least for me) is “No More Mosquitoes”. I don’t know. The dragging, heavy beat, the distorted samples, bleeps and noises – it’s not coming across as organic as the rest of the album, it actually has the power to annoy the listener more than just a mosquito. Sorry.

Apart from the bells and chimes, the other main element that seemed to fascinate Mr. Hebden was a wide variety of guitars, harps, zithers and sitars. Whether it’s in the little episodes or the longer tracks, they do most of the melodic work, nicely crafted repetitive themes that elevate tracks like “You Could Ruin My Day” – the longest piece on the album. Again, the basic rhythmic structure is mostly straightforward, everything else takes as many liberties as is needed to keep our curiosity on a high level.

Most of what we hear on this album is on a level that is much closer to Boards Of Canada than to most of what crowded the downbeat years. Playing with genres and their elements, staying wonderfully organic in a production style that is usually dubbed electronic, being decidedly urban with a big yearning for nature and freedom. The beginning of a long and hugely creative career.