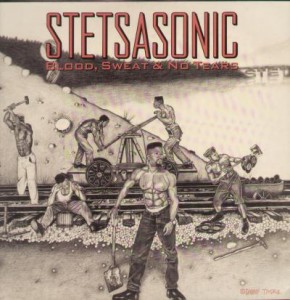 Better than the cover

Let’s start at the end. On the inner sleeve, the band is boldly saying:  “Stetsasonic is the one and only Hip Hop Band and the future of soul music.” In 1991, the West Coast was already doing its thing and the direction Hip Hop was taking surely didn’t move closer to Soul. It was much more turning towards guns and gangsters. So you might say that this statement wasn’t just bold, it was also pretty much out of touch with reality. It is definitely based on the courage that two successful albums will create, and indeed Stetsasonic was a band where other acts weren’t much more than a turntable and a few microphones.

Still. What they said about the future – it didn’t work out. This was their last album. We don’t know whether the blood and the sweat were followed by tears or not, in the years after Stetsa, Hip Hop rapidly ran away from its Soul and Funk roots, like a renegade son that didn’t feel like having any roots at all, doing his own thing. For a pretty long time this just might have been the last album that paid tribute to Otis Redding, Sam Cooke, George Clinton and a few other legends.

What we really need to talk about is the cover though. Some people might say that a band that chooses such a terrible cover illustration actually doesn’t deserve to exist for another album. It’s really, really bad. A dilettantish depiction of the band as workers laying railway tracks. Drawing the ridiculously exaggerated six-packs the guys have been given in this illustration must have taken up most of the time, even if the result is not really in line with basic human anatomy. Why the band is shoveling vinyl into wagons at the same time remains a mystery. My guess is that most buyers of this album made sure no one was watching when they made their way to the cashier.

Once you have gotten over this artistic derailment (!) – which is not really that hard considering that lots of hop hop albums displayed questionable taste in choosing cover art – the disappointments are at least not as extreme. Stetsasonic really is a band and that does qualify for a certain amount of respect. Real drummers instead of samplers and drum machines – we do sympathize.

But just in case we haven’t noticed yet, the album opens with an instrumental called “Hip Hop Band”. We got the message, and as an opener it’s okay. Then we get “No B.S. Allowed” and in a sort of reverse way, this track is kind of a sign of the times. B.S. is almost cute. I mean, really… Afraid of putting the word bullshit in your mouth? Come on. Over on the other side of the continent they were already barking an angry “Fuck The Police” into the microphones. Not that this kind of message is representing a role model in any way, but N.W.A. were directly pointing at severe problems the black community were having with law enforcement and Stetsa were still doing the old school routines.

Fittingly, they follow up with a dedication to UTFO, “Uda Man”. We get a few fresh samples and a dose of humor – but at that point UTFO was not the kind of reference that would let you come across as someone that’s at the forefront of the evolution of Hip Hop. You know what I mean. “Speaking Of A Girl Named Suzy” raises the tempo for a moment, but it’s as harmless as an early Fresh Prince tune. At least we get a small dose of P-Funk.

The problem with this album is that you don’t find anything even remotely as catchy as “Talkin’ All That Jazz”. Or something that has the same level of originality and clarity of concept. The title track is okay, but doesn’t really convince anyone. And the bits of silliness towards the end of side one – “Paul’s A Sucker” – don’t really help raise the level either.

It remains questionable whether it was really necessary to put eleven tracks on this long-player, and the CD version even had seventeen. The only effect is that it gets long and longer and you increasingly wonder why. It’s almost proof of this kind of overkill that the track listing isn’t correct. The sleeve says that the first track on side two is “I Like To Party” while the vinyl claims that it’s called “So Let The Fun Begin”. And what do they keep singing? “I Like To Party”. Oh well. As expected, it’s a funky party jam with a bunch of well known samples and not enough drive to let us want to party.

It’s not like the guys are lacking talent, and they do try hard. But they seem to have fallen out of time. Even in 1991, a contribution to the battle of the boroughs like “Go Brooklyn 3” felt outdated – these battles had long been replaced by the ones between East- and West Coast. Credit where credit is due though, at least for commendable use of P-Funk samples and a pretty good song title on “Don’t Let Your Mouth Write A Check That Your Ass Can’t Cash”. Not sure if that ass is moving yet, though.

Sometimes the fact that they are a band is actually providing some benefits, as in “Ghetto Is The World”, and we can see a glimpse of what would happen if the guys didn’t just do the old stuff with a band instead of some boxes with knobs, but we also understand that they probably wouldn’t have been able to rise to the level it would have needed – the ladies that are providing the singing on the chorus somehow feel like they have been just pasted into the mix.

Surprise, surprise: towards the end, the B.S is followed by some M.F. and they even say it. Motherfucker! The audacity even creates a little more flow than in most tracks of the album, even if what they are doing here had been done before and on a higher level by folks like Eric B. & Rakim.

It’s not difficult to understand why Stetsasonic called it quits soon after. As much as they may have thought that the Hip Hop Band thing was a concept – the album showed that it wasn’t. At least not for them. Maybe that’s one of the reasons why Prince Paul’s production work is not as good as it was for De La Soul – one of the things those guys definitely had was a clear concept. It just isn’t enough to do the same old stuff and think that being a band is making all the difference, especially when that conceptual idea isn’t really followed through all the way. Letting the other band members be a producer as well on some of the tracks may seem like a logical idea, you know, helping the band feeling like a real band and all, but that’s really not all that makes a band. We just don’t know what they stand for.

So, after this album, all the blood and sweat had been spent. The upcoming Gangsta Rap produced a lot of mediocre and even crappy albums as well – but in its best moments it was innovative, and that’s something you can’t say about this album.