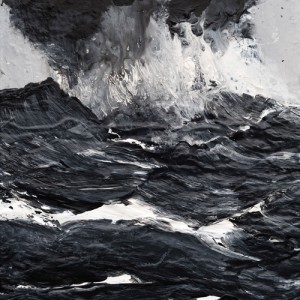 From Lounge to Echo Chamber

Respect. Over the years, the Boozoo Bajou guys have built quite a reputation in the downtempo segment, producing a series of excellent albums that you can still listen to with enjoyment while other downtempo artists’ work didn’t really age all to well – and then they suddenly drop almost everything that led to this success. Instead of crafting yet another high class lounge long player, they come up with something that is way closer to ambient, releasing it on the elite electronic label Apollo instead of their former homes Stereo Deluxe and !K7.

It’s fair to call a move like that courageous, simply because ambient is far more difficult to sell than their early material that was an ideal soundtrack for bars that knew how to select good music and stay away from the usual Café del Mar platitudes. And yet, the big step that Boozoo Bajou are making with their fourth album is at least understandable.

It’s something like a paradox. While – as mentioned – their early work is still perceived as excellent, the genre itself has all but ceased to be relevant, and their output on album two and three pretty much documented this process. There was just no space left for further development of this style.

Their second album “Dust My Broom” had already seen them move away from Stereo Deluxe and its rather narrow repertoire to !K7, a label that defies categorization by definition. In a way, this is a transition album, expanding the range of styles, but at the same time watering down the project’s identity. Some of the stuff was as expected, some of it different, and somehow the whole thing was slick and incoherent at the same time.

“Grains” followed in 2009. The plot thickened. Again, the album lacked clarity to a certain extent, but it also showed that there is an additional dimension to the project that began to shine whenever the guys a) worked without vocalists, b) reduced the tempo to the max (which had made them famous after all), and c) leaving everything away that wasn’t necessary and didn’t support the concept.

“Grains” finally showed that the next stage in the project’s transformation wasn’t the widening of the repertoire of styles, it could be found in a reinvention of the qualities that defined them in the first place. Tracks like “Fuersattel” or “Tonschraube” showed which direction the journey might take. Almost five years later, this album completes the transformation.

Still, the jump from “Grains” to “4” is a considerable one. What makes it exciting is that it feels like a liberation. The few parts that still echo the early days of Boozoo Bajou convey an impression that the guys have made their peace with their roots, and reached a point where they can use them as quotes from another era, an earlier life.

One example is “Phonetrik”, a track that features a rhythmic structure close to the early work, even if the guys slowed down even more, and enlarged the echo space to dubby dimensions. With a warm bass and a bit of guitar garnish it’s like “Satta” on dope.

Other tracks on “4” barely look back at all, like “Jan Mayen”, a piece that discards all rhythmic elements, sends the guitar into echospace, accompanied by harp and flugelhorn, leaving plenty of room for our listening enjoyment. It’s a reversal of strategy in composition – from a concept that tried to stay loose and relaxed within a clearly defined framework, this is one of the tracks where the lack of an obvious structure has become the concept, following an approach that could easily be improvisational.

For their general popularity, this shift will probably not be all too helpful. Tracks like “Camioux” or “Yma” were hits of the downtempo years while this album will appeal much more to those among us whose record collection includes one or the other compilation from Kompakt’s Pop Ambient series. “Utsira” could probably be smuggled into one of those collections of ambient tracks without anyone thinking it doesn’t belong there.

What probably will cause some bewilderment on the side of some die hard fans of the early days is that the overall mood has changed most – as if the guys had had enough of all that humid tropical lounge stuff and deliberately booked a ride on a ship to some arctic destination, at the same time traveling from storytelling to atmospheres, from being stylishly obvious to becoming intriguingly sketchy and scenic. “Der Kran” is almost an audio play without words, “Hirta” is quoting dub techno and minimal and stays away from those formats at the same time, and “Your Weak Fire” raises memories of modern dub à la Rhythm and Sound.

It’s absolutely conceivable that a large part of the appeal of this album may arise from the intriguing departure from earlier works. But then again – there is a lot of quality to be found, and sometimes even echoes of Eno’s Apollo Soundtracks can be detected, as in “Stufen-Spitzbergen” for example, at least during the first four minutes and until a synth bass theme of dramatic proportions enters the space – definitely one of the highlights of “4”.

Thirteen years after “Satta”, the Boozoo Bajou project definitely reached a whole new level that will earn the respect of critics and music enthusiasts and maybe alienate a fan or two. If someone sort of lost track of the guys after the first album and runs across this one – chances are they wouldn’t guess it’s the same artist.  Still, we can only congratulate Peter Heider und Florian Seyberth for taking this step, for having the courage and the creativity to come up with such a chilled and classy selection of tracks. The only comparison I can find for the transformation this represents is the journey that Talk Talk made from their first to their final album. And that really is a huge compliment.