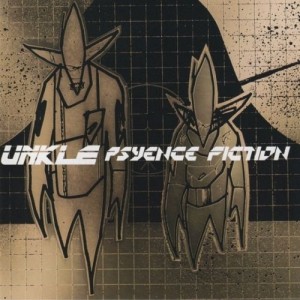 To illustrate how I think about this album I could just state the fact that it entered my collection five times – as files, as a CD and in three different vinyl editions. Plus a 12″ or two. Back in 1998 when it was released my admiration for it sharply contrasted the general reception among music critics. They mostly derided it.

A good twenty years later, it’s a very different picture. It has become clear that “Psyence Fiction” did quite a few things that were innovative, unusual, remarkable and groundbreaking, and what had once been called weaknesses of the album is given a different perspective – mostly the fact that it wasn’t really an album in the way critics expected it to be.

Still, they should have known. After all, we are talking about James Lavelle, and this guy never really spent much time in comfort zones, and his ambition had always been quite sizable. In ’98, his Mo’ Wax label had all but invented what was to be called Trip Hop, turning it into an epicenter of musical innovation. He paved the way for one of the greatest turntablists ever, DJ Shadow. And if he was world class at anything, then it was spotting great talent and getting things done.

Look at how we are all talking about collaboration in agile environments today, how everyone wants to work with great talents in flexible setups. Lavelle already worked this way in the mid-90s. UNKLE was as flexible as it gets. The definition: Lavelle doing stuff with whoever he wanted. A production collective with members that were defined by the project and nothing else.

Nevertheless, DJ Shadow’s contribution is one of the main reasons why this is a masterpiece. His singular talent in creating epic drum tracks and his incomparable class in combining carefully selected samples to tell unique musical tales is as evident here as it was on his own album.

Of course, “Psyence Fiction” is a lot more. Actually, a whole lot more – and it might have been just a little too much for some. It’s a massively rich concoction with a list of guest musicians that should have been eye-opening but left a lot of critics scratching and shaking their heads.

Even in 2021 the list of guest musicians looks like someone just pulled names out of a hat that contained every big name in the music business, regardless of what kind of music they were creating. There were rappers. Kool G Rap, Lyrics Born and Beastie Boy Mike D. There were great voices of Rock music – Richard Ashcroft and Thom Yorke. And to make things worse for conservative critics Lavelle added Jason Newsted to the list. Back then he was still with Metallica, and on this album he not only played the bass guitar, he also operated a theremin.

The result is a pretty wild mix that features everything the late nineties had to offer – rock, trip hop, rap, electro, alternative and even some symphonic elements. Could it be called incoherent? Sure, if you wanted to look at it that way. I always thought that bitching about the wide range of styles is like looking at a fresh bowl of bouillabaisse and complaining that there are too many ingredients in there.

Since when is it not okay to gather a whole lot of great people that do great music, throw a few ideas in the room and then see what will happen? “Psyence Fiction” was the album that opened a lot of musicians’ minds to go beyond their niches, to look at an album as a platform for diversity in styles and collaboration. Not just some guest vocalist for the inevitable duet. Not just the guest guitar player supplying a solo somewhere, and not just a featured rapper for a cross over hit single. No, the album is not lacking conceptual coherence – the album is the concept.

The album appropriately starts with “Guns Blazing (Drums Of Death Part 1)”. Massive drums and bells and sounds and equally powerful rap supplied by Kool G Rap. This might just have been his best delivery ever. Supposedly, DJ Shadow said about the track that it was “too hardcore for rock dudes, too out there for rap dudes”, and that nobody played it anyway, adding “at the time”. This little addition says a lot about how the album and this track were clearly ahead of their time.

Everything that surrounded this project  was a huge mess and the frustration that is manifested in Shadow’s comment was one dimension of it. As much as James Lavelle had been a master of self-promotion, on this project he simply went too far. At one point he compared the seemingly endless production process to the similarly epic story around “Apocalypse Now”, a comparison that basically begged journalists to open fire. And they did.

Lavelle later said that the album was released at a point when the music critics wanted to see him go down. It might be true at least to some extent, but he also made it really easy. The journalists mostly tore it apart and DJ Shadow departed the project shortly afterwards. And as much as UNKLE may be Lavelle’s project, the departure of Shadow was a severe blow. On “Psyence Fiction” all titles but one carry the same credit: Music by DJ Shadow.

He makes the difference. Even on slightly weaker tracks or what critics claimed to be fillers.  Both the “Unkle Main Title Theme” and “Bloodstain” feature moody rock guitar themes over tight Shadow drum tracks, and even if the vocal performance of Alice Temple on “Bloodstain” may not be all too memorable – the track’s gloomy atmosphere works. And on “Unreal” we actually get what most critics probably expected – a track that sounds like a logical follow-up to “Endtroducing….”. Classic DJ Shadow, no guest stars, perfect production.

Again we need to give credit where credit is due. “Lonely Soul” is a great song and probably the best performance Richard Ashcroft has ever delivered apart from “Bitter Sweet Symphony”. This is when the whole project comes together and its vision is turned into reality. The drums are an absolutely perfect companion for Ashcroft’s delivery, the strings are real and elevate the theme and mood. The epic deconstruction and break, the buildup towards the end of the track – everything works together in a way a great production should, creating an impact that is far bigger than the elements it is made up of. It can still give you goosebumps.

It’s super easy to accuse Lavelle of making it all too big, too epic, going too far when feeding the hype for the album, and it might even seem plausible to call all of this pretentious. But the problem is that “Lonely Soul” is in no way failing to deliver on the grand expectations that were piled up. And it’s actually only the second-finest moment of the album.

Before we reach that best part we get a massive dose of superbly dirty guitars on raw drums and an absolutely fitting vocal performance of a guy that was hardly known at the time – Badly Drawn Boy. “Nursery Rhyme” is Beatles on Punk with rare groove drumming, a chorus theme that builds and builds – no, I still don’t understand why critics could tear this album apart at the time.

It’s a really tight line the album is balancing on, and “Celestial Annihilation” could have fallen on either side of it. Is it a nicely crafted homage to Bambaataa, Newcleus and other heroes of early electro hip hop or just a load of kitsch with all its strings and simple space funk synth themes? Don’t ask me – I love it just as much as I love my old Newcleus albums.

As if on cue, Mike D enters the room on “The Knock (Drums Of Death Part 2)”, the anarchic brother of the opening track. No idea whether this was the idea behind it, but it sounds as if Shadow and Lavelle had this idea of merging the Beastie Boys’ whole back catalogue into one track – the early Punk phase, the snotty-nosed early rap days and the more artful years, all rolled up into one, with Jason Newsted banging the bass. It works.

Yes, “Chaos” is sort of a filler, maybe an interlude, a slightly psychedelic folk floater featuring a singer called Atlantique – she reminds me of the naive girl singing an equally naive little song in the hugely funny movie “The Party” with Peter Sellers. No idea what the function of this song might have been – but in a strange way it heightens the effect of what follows. “Rabbit In Your Headlights”.

This track alone would have made up for dozens of mediocre tracks – and we have maybe heard one. What can you say? Thom Yorke is huge, and we absolutely must give tons of credit to both Lavelle and DJ Shadow. This song already had everything that would turn Radiohead into giants on “Kid A”. Even more than what they gave Ashcroft on “Lonely Soul”, everything about this epic piece has been created to make Yorke’s delivery as impactful, as intense and as haunting as it is. Again, everything comes together – and the only way to increase the effect is to watch the incredible video of it, shockingly well directed by Jonathan Glazer.

James Lavelle never really made it easy for anyone to like him. A lot of people just don’t, simply because he pumps things up a little more than necessary, his hubris being as legendary as his tendency to make bad business decisions. His behavior was one of the main reasons why critics jumped at the opportunity to give “Psyence Fiction” negative reviews – which in turn led DJ Shadow to leave the project in frustration.

The album deserves way much more credit though, and in recent years, the perception has changed significantly. Finally, it stands there like a monolith, a strangely isolated masterpiece that somehow gets bigger with every year that passes since it was released.