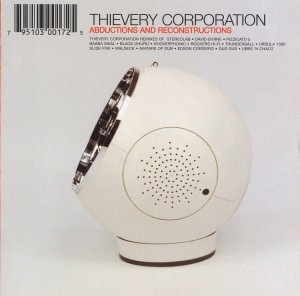 Things went pretty well for the Thievery Corporation back in 1999. The downtempo scene had found their first prime protagonists and these two guys were among them. Partly due to a really impressive and innovative first album, and pushed by their excellent “Shaolin Satellite” featured on Kruder & Dorfmeister’s genre-defining DJ Kicks mix. Things were going their way.

Rob Garza and Eric Hilton were (and still are) smart guys and savvy business people – much more than most of their fellow downtempo heroes. They already had their own label – Eighteenth Street Lounge – when they released their first 12″, they made sure the label was given a very slick and sophisticated design and they already opened a very slick place to hang out and party in 1995 (unfortunately, one of many victims of the Corona crisis – closed in 2020).

It’s no surprise that lots of artists were eager to let these two gentlemen sprinkle some of the Thievery Corporation magic on their musical output. And they did, as we can witness on this collection of remixes. It’s a wide range of artists, some well known, some less, some expected clients, some surprising ones. David Byrne, Gus Gus, Stereolab, Black Uhuru, Pizzicato 5 – no less than fifteen examples of remix thievery are on display.

We might already ask a crucial question here. Did Garza and Hilton simply say yes more or less every remix request they received back then? Or is this impressive looking list and range a testament to the universal acclaim their remix work received?

Let’s put it this way: not all of the 15 remixes are up to the standards the Thievery Corporation had defined by their original work. It might even be justified to say that not all of the fifteen original tracks are really that remarkable to begin with. And the third theory is that the guys were maybe a lot better at producing their own music than they were at remixing other people’s stuff.

There are some highlights. David Byrne gets his “Dance On Vaseline” nicely polished, featuring a little bit of reverb on his voice and a loungy treatment on the drums and the bass. It’s not like they really did much, to be honest, and that’s a smart move and a good start.

Problem is – we get lost in arbitrariness quickly. Baba Maal is not a surprise choice here as the Thievery world was very open to cultural diversity, musical styles of the Americas. But who are Slide Five? It’s always nice to push some up and coming (maybe) artists with a remix – but put it on this compilation? Nah, not really. It seems obvious that it would have led to a better result if the guys had just started from scratch.

The plot thickens. Great tracks lead to nice remix versions, the rest sort of passes us by. Rockers Hi-Fi and Stereolab here, Waldeck, Ursula 1000, Urbs’ n Chaoz there. I keep picturing the whole thing like a field trip to Washington, all of the artists getting on a bus, none of them really knowing who else is there, some recognizing the more famous ones, look look it’s David Byrne, but who are the guys with the dreadlocks over there?

That’s kind of how the fifteen tracks assemble on this album, sitting together, sort of loosely related but not really connected, it doesn’t necessarily matter where they sit on the bus, maybe someone put a note on the seat with the extra leg room up front, reserved for Mr. Byrne. The bus is a nice one, comfy, nice design, big Thievery Corporation logo on the side.

They all ride over there, wondering who is who, some introductions here and there, and when they arrive it’s off to the cocktail lounge, nice plushy sofas and excellent drinks, hanging around after delivering their tracks, and what the lounge is doing to the musicians on the sofas is kind of what the two remixers are doing to their music.

Don’t get me wrong, I like it there, in the lounge, and all fifteen artists obviously did too. Nothing wrong there. Still – it might have been a better idea to leave that remix album idea on the shelf for a few more years. It all feels like the track list is what had already been on the shortlist. No bouncers at the entrance of the lounge.

As a follow-up to their excellent “Sounds From The Thievery Hi-Fi”, this collection was a bit of a letdown. But also a valuable lesson. While other downtempo acts earned their fame with almost nothing but remixes, these gentlemen could only really shine when they composed and produced their own stuff. And if you look at what happened in the two decades that followed it’s easy to understand which concept was more sustainable. A true artist will always survive a mediocre remix album.