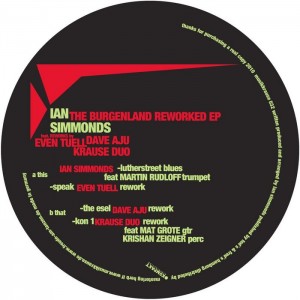 Ian at the Krause house

This EP needs an explanation. Just like Ian Simmonds it has a pretty unusual story behind it. First, there was the Burgenland EP. Three little tracks, digital release only, on Musik Krause – his first release on this cute little label. Shortly afterwards Simmonds presented the Burgenland Dubs. The title is a little misleading as a) it boasts a wide range of musical styles but no Dub and b) it’s a full album that contains way more than the three songs of the EP (as original, not dubs).

There’s more: this is the remix EP of the album and should really be called the Burgenland Dubs Reworked EP (which is now actually the fact on his download site) as three of the four remixes are based on tracks that are found on the album. And the fourth? Well, it’s only found here.

Are we going to complain about this? Certainly not. Just a nice little story, and one that fits the unusual career of Mr. Simmonds, a Welshman living in Jena, Germany, that recorded for some very fine labels and has never tied himself to any kind of musical style, mixing it up however he pleased.

This EP can serve as a good example. An original, a remix by Even Tuell (Workshop), one by Dave Aju (Circus Company) and one by the label’s own Krause Duo. That’s a pretty wide range for just four tracks.

It’s a nice twist that the label returns the favor of Ian Simmonds adding a touch of Jazz to the label that is mostly known for a slightly funny twist to what East German minimal had to offer. On “Kon 1” they don’t move it closer to their home base, they even increase the dose of Jazz with Mat Grote on guitar and Christian Zeigner on percussion. Nice touch.

Dave Aju on the other hand did give “The Esel” (Esel is German for donkey) some grooming and shearing, turning it into The Dancefloor Esel. Vocals more prominent, a natural feel to the drum track contrasted with moderately driving synth work. Solid stuff.

The opener “Lutherstreet Blues” is the one non-remixed track, an addition that is true to the vibes and styles of the other two Burgenland releases. A Simmonds size dose of Jazz, a fine guest appearance on trumpet by Martin Rudloff, an atmosphere that indicates a bit of a drizzle over Burgenland.

Clearly the finest contribution here is the Even Tuell remix of “Speak”. The deeply rooted soul of the complex groove of the original track is carefully unearthed and liberated, the vocal renditions are reduced to a single word that is repeated at various speeds – speak, they keep saying, a seemingly unanswered request set in an atmospheric framework that is hesitant, yearning and grooving at the same time. I still keep it in my bag just in case I happen to play for a crowd that would appreciate it.

Over the years, the output of Musik Krause has become a little thinner, but it seems obvious that the addition of Ian Simmonds and his more eclectic approach has kept the little label going. Robag Wruhme kept putting out their stuff there, Dave Aju joined in, Soulphiction dropped by as well. With this kind of output you would hope they keep it going.