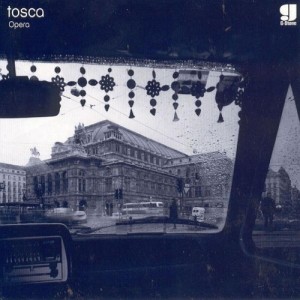 Vienna, 1997. Two names dominated the international downtempo scene and caused an impressive wave of new projects, acts and artists to follow their example. Kruder and Dorfmeister managed to do that with a few remixes, a mini-album and a DJ Kicks mix. As artists, their output was remarkably thin, a fact that was much lamented at the time, and it is easy to imagine that this wasn’t enough for Richard Dorfmeister. So he teamed up with his buddy Rupert Huber, went to the studio and started something that was more substantial. They called it Tosca, and the first album was fittingly called “Opera”.

The disappointment around the K&D project quickly vanished as a consequence. “Opera” did two helpful things at once: it was clearly related to the style that Dorfmeister had created in partnership with Peter Kruder and therefore eased the hunger for more, but at the same time it clearly approached the new genre with a more venturous and experimental attitude. There was a concept behind it, one that might be compared to David Holmes’ “Let’s Get Killed” which was released in the same year.

Just like Holmes, Dorfmeister and Huber used bits of monologue, snippets of comments, singing, mumbling, stuff that is closer to found sounds than studio recordings, and they created a more specific atmosphere and demonstrated a deeper understanding of musical concept than K&D ever did. Most of what was created in Vienna in those years is not really worth mentioning, the whole downtempo genre had often rightfully been labeled as mostly quite shallow, but you can still enjoy “Opera” more than 20 years later. There is substance.

The opener “Fuck Dub Part 1&2” makes that perfectly clear. Yes, the foundation is very much K&D with its slow groove and solid drum track, some of the vocal samples are integrated in a way that does remind us of the “G-Stoned” EP, it’s slightly dubby, not necessarily what we would call a departure from earlier times. And yet, these eight and a half minutes have more density in concept, more innovative spirit and less of what usually happened on K&D tracks that were primarily establishing the elements of a piece and then simply arranging them in a fashion that followed the patterns of both pop and electronic music.

Unfortunately, the conceptual density of the album is not quite as clear on the vinyl edition as it is on CD – several interludes didn’t make it to vinyl, little collages of old radio transmissions, parts of conversations, found sounds. As small as these contributions may be, they are vital as they let us feel what the guys were doing. Some of these snippets were used in some of the longer pieces as well, turning these interludes into little comments, echos or variations, and creating conceptual coherence at the same time.

In a way, they even set the tone for some of the tracks that are clearly placed at the heart of what downtempo was all about in those days, so you transition into a piece like “Worksong” with a different mindset than if this is just the next song on the list. Again, we understand that Tosca is a more refined project than K&D was, with slight whiffs of krautrock emanating from the way drums and bass just keep on moving along, and an almost late-60s and early 70s way of letting the tracks go where they want to go, like on “Worksong”, until the bass is almost by itself, slowly exploring its theme until it’s time to call it a day.

The most popular song on this album, “Chocolate Elvis”, is sort of a classic already, one of the finest moments of the early downtempo years, like Kid Loco’s “A Grand Love Theme” or Thievery Corporation’s “Shaolin Satellite”. Its slight jazziness, the simple bass theme, the vocal samples swinging from scat to opera and back to blues and rock’n’roll as interpreted by a street musician, the sweeping synths and background chorus, it just all fits perfectly together.

But just when we have settled down in our armchairs, enchanted by loungy hit material, we get challenged. Thankfully. As in “Postgirl”, functioning as some kind of remix of elements, spending four and a half minutes on what the interludes are doing. Most of the vocal snippets of the other tracks are thrown together and piled on top of each other to form a strangely rhythmic choir on top of a drum track that we have heard as well, on “Fuck Dub Part 1&2”. The echo of an echo.

What totally throws this album off the K&D track (if we haven’t understood that already) are the eight minutes of “Ambient Emely”. The title already gives it away – it’s almost classic ambient, in a tradition that can be compared to early works of The Orb, like a section of their “Adventures Beyond The Ultraworld”. It’s not even trying to set project apart, it’s actually set within the heart of “Opera”, another variation on the theme, and deep in the background we can again identify some elements we have heard earlier on, like a keyboard loop from “Chocolate Elvis”. This is how you broaden the spectrum of an album that has a clear and discernible concept.

“Buona Sarah” is giving us both dimensions in one – ten minutes in all, six in solid downtempo style, the rest as a dubby ambient excursion. Why? It must have seemed like a good idea at the time, and no one ever said that you can’t let the second half of your track drift off into ambient. Just like no one ever said that it’s not okay to let your post rock epic drift off into layers of feedback and noise for a few minutes (yes, I’m talking about Mogwai).

I can still remember the day I picked this precious double vinyl album up at Frankfurt’s legendary “Freebase” record store. They did get a pretty noticeable share of my salary in those days, and it was a great time to buy music.

Some people argue that “Suzuki” and “Dehli9” are the real gems in Dorfmeister and Huber’s respectable oeuvre. I tend to put this slightly ahead of them. This is where they were most innovative, this is where they showed the tightest conceptual work, this is what Kruder and Dorfmeister should have been and never could have been, this is a milestone. It’s the Krautrock of the late nineties.