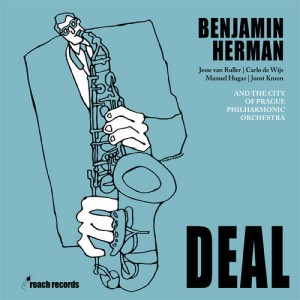 When the soundtrack is longer than the film

Benjamin Herman is from the Netherlands, and he plays the saxophone. He is leading a band called the New Cool Collective and has played on the side of Candy Dulfer. Some years ago, he was voted best dress Dutchman by “Esquire”.

Profilers among us might deduct from this list of facts that Mr. Herman is an aficionado of the smoother, more loungy kind of jazz and swing, the kind of music that is far enough above what would register as muzak but might put wrinkles on the noses of one or the other jazz enthusiast. Add the fact that he invited the City of Prague Philharmonic Orchestra for this album and you can guess that this is a pretty dapper “Deal”.

But hold your noses. “Deal” only gets gooey in a few weak moments, and it does have style, it’s even a pretty lively affair for the most part. It’s the soundtrack for a film directed by a guy called Eddy Terstall. It’s a thirty minute flick about a man, a woman and a fistful of Euros. He asked Benjamin Herman to do the soundtrack and he was so enthusiastic about it that it turned out to have a longer playing time than the actual film.

Conceptually, “Deal” is kind of a slick homage to the music of spy flicks of the sixties and seventies. Mr. Herman was serious about the whole thing. Very. He worked on this for over a year, started out with four guys in the studio and ended up hiring the above mentioned orchestra. For good reason, we must admit – the strings are marvelous.

His band members are just as capable. Manuel Hugas plays his Höfner bass guitar like someone that just exited a time machine, arriving from the late 60s, drummer Joost Kroon shows a lot of versatility, Jesse van Ruller operates his guitar with elegance, and Carlo de Wijs really knows how to use his Hammond to make this affair a classy one. Benjamin Herman himself is not really breaking a sweat operating his sax, and he is not drowning in clichés – an achievement, really – too many shmoozers have given the instrument a bit of a bad reputation, especially in this loungy segment.

You might want to disagree regarding the clichés though, depending on where you put the threshold. Bond movie inspirations, trips to the cocktail bar, moderate funk excursions, moments ranging from drama to sensuality, it’s all there, and Herman’s band puts it on the stage in style. It’s civilized, you can keep your tie on and even twist a little bit. In its wildest moments you can even imagine him being secretly inspired by Tarantino soundtracks.

Don’t get me wrong – this is a pretty decent effort, and it has its moments. It’s an entertaining little soundtrack that was created with care, and just in case there’s a kind of upscale cocktail lounge sort of place with slick people partying in distinguished fashion and you’re supposed to play some appropriate music, take this along to entertain them. You can’t go wrong.