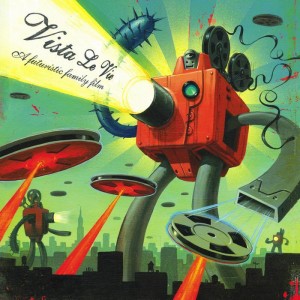 The film we should have watched

It happens again and again, and it’s as sad as it is a mystery. Two musicians get together, combining their talents for something special, record some music far away from the pressures of an expectant crowd, come up with something truly extraordinary, only to disband again and seemingly disappear. It even happens on labels that are known to discover and support these kinds of artists, known for an innovative spirit and for taking good care of their artists. Like Laurent Garnier’s F-Communications, the home of Vista Le Vie.

It was a short career for this duo of producers from France – two mini albums and this LP that includes tracks from the first two publications – and that was that. Sad, really, and for a while I assumed that the guys were probably just not able to support their lives with the money they earned from this project.

But there is a happy end to this story. At least one of them, Max Guiguet, is still very much in business, having started a second life under the name Blundetto, recording for one of the most lovely labels ever, Heavenly Sweetness. Still, I would be interested in why this didn’t go on, especially in light of the love and care that went into making this really nice album.

And that’s what “A Futuristic Family Film” is. Really good. An ambitious, high-quality production with a lot of very fine ideas, created with great care and a lovely touch. On Discogs it is labeled as abstract and experimental, but I would argue that these categories are misleading. I took this album for quite a few spins when I was djing in really good bars, and those aren’t necessarily places that go well with a lot of experimentation and abstraction.

It’s more like a special blend of musical storytelling based on downtempo with added flavors of jazz and soundtrack atmospheres, a dash of pop here and there. That’s sort of what it is. Nicely staged, all of it.

In “Crime In Stereo”, guest star Black Sifichi tells us the story of a guy that is out to buy a hand gun, he will only feel safe when he owns it, so he wants to walk the streets to find a place to get it, wants to read about crime, ideally the crimes he will commit. And then he has it, a good four hours later, thinks about who he wants to shoot with it, whose disappearance he wants to hear about in the news. Both in the way this is delivered and even the way it is put in scene, this really reminded me of some of the magnificent paranoid tales MC 900 ft. Jesus used to tell.

And it gets even better on “For You (And You)” which features a fine reading of an Ishmael Reed poem, “Poetry Makes Rhythm in Philosophy”, about how rhythm can get along without nature, but nature can’t do without rhythm. The seasons swing. It’s a great poem, read by the poet himself, and these two gentlemen have found a very, very adequate way to accompany it musically. It’s the highlight of the album and helps us live with the pop flavored and not necessarily convincing opener “First Class”.

We keep getting pleasantly surprised by Monsieur Guiguet and Monsieur Blanchard. Side 2 gives us two parts of “Refuse, Resist”, and both of them are fine proof to the ability of Vista Le Vie to tell stories even without words, atmospheric and sophisticated both on an instrumental level as on production. The shorter reprise at the end of side two is a little more loose, the guys are even jamming a little. The two parts of “Refuse, Resist” embrace a certain Barbara Silverstone on “That Strange Rhythm”, a lascivious piece, slow and seductive, and Barbara (who seemingly and fittingly was never credited on any other album) is definitely in a mood to talk about caresses and things. Not necessarily innovative, but it’s classy stuff.

Another band that didn’t exactly hit the big time drop by on “Seven Thousand And Three Hundred Days” – British synth/indie duo Grand National. Their vocals kind of made me think of Big Audio Dynamite, minus the sarcasm, plus a dose of dreaminess that faintly reminds of Air as well. This is really harmonious and atmospheric stuff, and we keep asking ourselves why this didn’t at least hit the radios, even if only in select night programs.

Why didn’t this album get noticed? Even the slightly more electronic “Tanzanite” with its exotic undercurrent and its tricky little rhythm is not an explanation. You can’t not like it. Okay, it doesn’t necessarily lead anywhere in particular, but it sure rewards the listener.

Once more, Mrs. Silverstone returns for “A Curse She Cannot Win”, a track that had already been featured on the duo’s debut mini-album “Don’t”. Which is an interesting bit of information as we probably witness just how much the project had developed since those first days. The disenchanted reflections of a woman desiring something new and unknown are not quite as convincing as her earlier, more enticing propositions. Luckily, the guys get back to fine instrumental work and and slick production for the closing track, “Cascade”.

Adding it all up, this is just far to good to remain virtually unnoticed. Too good to make anyone tell the two friends to go home again. But maybe that was the problem. Not really friends. Different concepts of what to do next. Two diverging artistic views. But as mentioned above, the story has a really nice epilogue. Monsieur Guiguet turning into Blundetto five years later and making us happy with every new release. Still. Did I say this was a really good one?