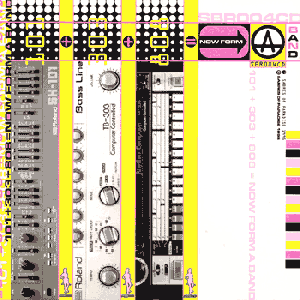 Yeah. That’s what it was like. In the early to mid nineties, techno was a pretty raw product. Just look at how people dressed up when they went out to the techno clubs, or remember yourself back then if you are old enough – it can be an embarrassing exercise. Everyone felt like they were living the modern urban life, four to the floor, full speed, full force, ummz ummz ummz ummz, all night long. Looking back it somehow looks much more provincial than it felt at the time.

Naturally, what you hear on this compilation does sound as simplistic as the title suggests and as we would expect. Following the punk formula once published in a fanzine (“This is a chord, this is another, this is a third, now form a band”), lots of early techno acts did just that, as well as an endless herd of young people who slaughtered their piggy banks to buy a 909 or a 303. Or both if the piggy was stuffed well enough. Crank it up to 140 bpm, let it rip, add a few samples and a simple chord progression on your little keyboard, and yes, form a band. If you want. No need, if you think about it. There’s MIDI. You’re the band.

True to the title, all of the acts here had been unknown (or didn’t exist) before this compilation. The same was probably true right after the publication of it. The whole thing was published on a sub-label of Sabres of Paradise, you know who, Andrew Weatherall, and features the likes of Turbulent Force, Point Alpha, THD, Pod, Psyche und Lords Of Afford. Add up all of the publications of all five acts, you get to 14.

Looking at it that way it’s easy to say that the formula didn’t really work out – but then again, the whole project clearly wasn’t conceived to prove the case in itself. It’s interesting to read what people who commented on this album had to say. Mostly it’s about what the drum sounds like, whether the samples are good – it’s all about the production and the sound, the effects etc. It’s like kids walking out of some action or sci-fi movie saying how awesome the film was and actually really just discussing the special effects.

I admit – back in those days I had an Atari 1040 and a cracked version of Cubase, a Korg Wavestation, a simple AKAI sampler and a 909. I did form a band, sort of, and I even went on stage once. It was impossible to play the stuff we had cooked up live, so I hid a DAT tape deck under one of the desks, playing the four or five tracks we had with while we made massive use of the fog machine and went through the motions like they do on those playback shows on TV.

No, it didn’t sound like the stuff on this compilation. This is relentless banging stuff, we would have wanted it to be less monotonous, less simplistic. But that’s not the point. We were making music without being able to play a single instrument. Just like most everyone else that was toying around with their Rolands. And we had a great time. It was fun, and if we had had any talent whatsoever… Well, we didn’t. Or we weren’t banging enough. Didn’t know the right people. Didn’t really go for it. Or all of that.

But it sure was good fun fiddling around with the effects of my bass station or the drum programming of my 909. I may not like the eleven tracks of this compilation very much, but I can definitely relate to how it was done. Which is more than I can say about a whole lot of other albums.

Yeah. Back then, everyone was a band. All you had to do is do it.