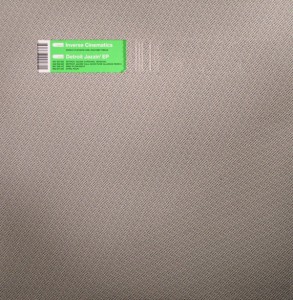 It was Eddie who told me. The guy who ran the bar I used to go to every Friday to DJ and sip an occasional glass of really good wine. I had been playing one or the other Inverse Cinematics tune and he liked it enough to google them. “Did you know that this is the same guy that’s behind the Motor City Drum Ensemble?” he asked. I just looked at him, baffled, and he confirmed. Yep, that’s the guy.

Danilo Plessow, much celebrated house hero from Stuttgart (home of Mercedes Benz and Porsche, making it Germany’s motor city), had already had a pretty slick project before MCDE, one that was just as innovative. Instead of cooking up a new recipe for house music as he did with his drum ensemble, he created his own electronic music brand of jazz.

It makes a lot of sense that this EP is called Detroit Jazzin’ – simply because it fits much better, it’s definitely not New Orleans Jazzin’ or Chicago Jazzin’. It’s driving, it’s energetic, has a lot of forward motion, and is as organic as it is at home in the electronic music realm. It’s a mix that you only got from formations like Xploding Plastix or Kevin Yost. On a good day.

Once I knew it was Plessow, it became totally obvious. The drums give him away. It’s not like he is a guy with a giant output. He focuses on quality rather than quantity, and every single 12″ he put out was a demonstration of his immense talent in constructing marvelously organic and rolling drum tracks. This is no exception. He is one of the few guys on the planet who are able to create beat tracks that are as broken as they are smooth, they feel natural and programmed at the same time.

It’s all there, a jazzy and at funky bass line, simple and warm Rhodes chords, very effective repetitive chord progressions and plenty of jazzy breaks to make the journey worth while. This is as good a definition of dance floor jazz as you will ever get.

Problems always arise for whoever is invited to provide a remix for something that is as clearly defined and special as this track. In this case, the All Good Funk Alliance is on duty, and it’s not really working. How could it, I don’t really blame them all too much. Their alternative bass line is not as driving as Mr. Plessow’s, the modified drums don’t have the same groove, samples suddenly don’t do much more than function as a garnish – yeah, it’s nice but it just rolls on by.

The B-side is what it usually is, a B-side. Two exercises in beat structure, putting clearly more edge to the mix on “Sine-Flow Disco”, a track that grabs Latin elements in a more ruthless manner, resulting in something that sounds like a Zero dB remix of itself, when the Latin touch is moved up a noch, from seduction to attack.

By the time we are in danger of breaking a more serious sweat, “April Four” comes along, scaling the mood down from Zero dB to Eighteenth Street Lounge, borrowing the flute from Kruder, or Dorfmeister. And if the excitement is equally toned down compared to the A-side, it’s more due to the quality of “Detroit Jazzin'”, less due to a sudden lack of talent on the side of Danilo Plessow.

More a 12″ than an EP, I would argue, fully relying on the greatness of the title track. This project would have deserved a lot more attention – but then, he did get that, later on, as the Motor City Drum Ensemble.