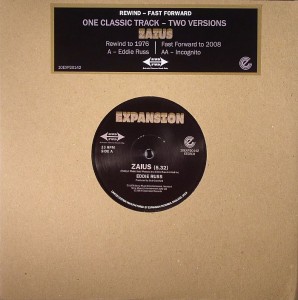 The folks at expansion have come up with an interesting little niche concept – a series of 10″es featuring a not too well known classic on one side and a new version of it on the other. Version, not remix, as in folks heading over to the studio to record something new.

For this third installment they picked a jazz funk classic from 1976 – Eddie Russ’ “Zaius”. Mr. Russ is a keyboarder from Pittsburgh that was mostly active in the seventies, producing a handful of albums with his band. “Zaius” clearly was his biggest hit, and it’s a pretty good choice for this series.

I gotta admit – I didn’t know the track, and I didn’t know good old Eddie. But I might just be in good company here. When I listened to the track on decks.de it sounded like a super relaxed slow groover. And when I took the vinyl for a spin and selected 33 rpm as sated on the label, and it still was a nice and loungy tune.

But somehow it really didn’t relate to what I had read about the tune. So I checked it out on YouTube. Surprise, surprise – suddenly, “Zaius” turned into an animated uptempo dancefloor number. Back to the turntable, switch to 45, needle back to start, and there you go. That’s the one.

Of course, this is not the first time that the guys at the label mix up speed indications on the label, and at decks.de they dutifully digitized the track for prelistening at the speed indicated. And, to be honest, “Zaius” does sound pretty good at 33 as well, it’s hard to detect there’s something wrong with the speed.

We can safely assume that the folks at Expansion didn’t do this on purposes, somehow having fallen in love with the slowed down version. Especially because the new version by Incognito is also equipped with this faulty indication. Not important for me though. I clearly bought this 10″ because of Eddie’s original.

At correct speed, the classic version is so much more of a natural groover, and its wonderfully enthusiastic soulful guitars are way more authentic. Incognito is a really good band, but I always find them a little bit too polished, they never really let it rip. And Eddie Russ is a clearly more gifted keyboard player.

The thing with the 33-45-mixup keeps intriguing me. Maybe I’ll take Eddie along next time I dj at a bar and let him do his thing at 33. I bet no one will raise their hand in protest. But I better think about what to say when someone walks over and asks me about the tune. Or what I say in case Eddie drops by.