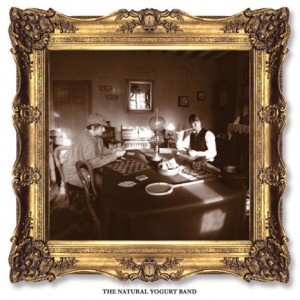 It starts with the rather unbelievable story of the album reaching the record company in a neat little package without any further information about the people who created it. No credits, no history, no promo pics, nothing. And that the folks at Jazzman listened to it and loved it so much that they released it, just as it was. Stupid, right?

Of course we know by know who came up with the silly name and title and with the charmingly stupid album. One of them is a guy called Wayne Fullwood, a drummer and bass player with a love for Polish Jazz, italian gangster movies and a big fan of library music. It’s not as if he is the only guy with preferences of this kind, but it sure identifies him as a guy with good taste. And we will definitely talk about his drumming later.

The other guy that is sort of responsible for this is Miles Newbold, the owner of a recording studio in Nottingham called the Chicken Shack. Not a huge name in the business. Newbold is an even more fervent aficionado of library music, and since his studio is only mentioned for the three bands he was involved in on Discogs, there is a high probability that this is was is mainly being recorded at the shack.

Two wacky guys with a stupid band name and an even more stupid album title record an album that is really entertaining and wonderfully wacky, without the slightest intent of becoming famous as a result of it, simply having a stupid amount of fun in the studio. I’m sorry but you really gotta love these guys.

The stuff this album is made of is simple and effective. Part one, and this is what carries the whole thing from beginning to end, is the immensely tight and funky drumming wacky guy number one is supplying, equally crisply recorded and mixed by wacky guy number two. As much as they may love 60’s jazz and soundtracks, this is super excellent hip hop drumming, and you can already imagine some folks licking their fingers for some nice little drum loops for their sample library.

Part two is how this is complemented by equally competent work on the Hammond. Obvious choice? Who cares. The guys play it well. And whenever that is not enough, there’s some flutist waiting for his turn as well. The bass? Also never lets you down.

But what really makes it work is that none of what is being presented here is taking itself any more serious than necessary. When the dudes are contributing background vocals you never quite know whether this is really meant as a serious contribution or just something they came up with at the spur of the moment, needing more takes than necessary because they were laughing their butts off all the time. “Chit Chat”. Awesome.

Nothing is sacred here, no idea too stupid, and yet they all work. “Better Days To Come” starts out as a sketchy little polka with some serious vibraphone dude showing off, and then it suddenly drifts off into a surprising minute of coolness. And man, these guys can be cool as fuck. Right when you least expect it, they let it glide in the smoothest of manners. “Thoughts” is a true gem that can give you goosebumps, the drums are magic and the organ riff is a killer. I would have been just fine with a ten minute version of this. Or more.

It just goes on and on. “Voodoo” is a dreamy little interlude based on a simple and lovable melody and some distorted, almost theremin-like organ sounds, giving us a bit of a breather before they send us off again with a nice bag of bossaesque playfulness on “Pipe Dreams”. Someone found their bongos in the back of the studio and just happily whacks away at them. I think I need a Martini.

They go South even more on “Latin Illusion”, and hey, it actually gets a little complex and maybe even serious, just to make sure we understand that if necessary the guys can switch gears anytime they want. Contemplation and a heavier dose of Jazz on “The Woods”, severely broken beats, weird noises and the driest bit of bass playing you can imagine on “A Broken Rose”, electronic weirdness on hip hop beats on “Space Echo”, every new song is a new dimension of playful wackiness of the Natural Yogurt kind.

Just when you thought it doesn’t get any cooler the band combines great hip hop drumming with a big serving of dub, and the guitar does what it should, but it doesn’t sound Caribbean at all, it’s much more Manchester or something. What a combination. And for the final round the dudes slow it down again, giving us a super relaxed farewell song that showcases all of their musicianship. “Lament For Piano” – and we do lament the end of the album.

Hats off to Wayne and Miles and the guys, whoever they were, contributing to this remarkable album. This is so not commercial, so much not trying to impress, this is so full of joy and fun and lovely little ideas, such a stupid cool album that the title isn’t really stupid anymore after having listened to it, it does do away with melancholy. Easily.