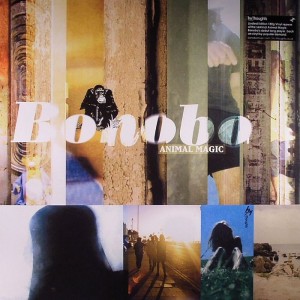 There is magic in every beginning

These days, it’s really easy and maybe even already past fashionable to think that Simon Green a.k.a. Bonobo is really special. Mostly because that’s the simple truth. He appeared on the scene right when the downtempo hype was building, quickly turning into one of its most prolific protagonists, and equally quickly rising way above a form of music that quickly flattened out into arbitrariness and facelessness.

Two decades later, the downbeat trend has long vanished and the few artists that survived its slow downturn have found their way into other niches – or created their own place on the musical map, like Bonobo. But in 2001 he was still sort of an insiders’ tip. I had the good fortune to do a telephone interview with him back then, and I was pleasantly surprised to chat with a really humble and friendly man, curious – sort of fitting the Bonobo label as this most intelligent kind of chimpanzee.

Bonobos live in unique harmony, are much more relaxed and peaceful, male and female animals have equal rights – it’s a pretty chilled out bunch. And harmony, euphony, and a pretty relaxed form of sophistication is what describes Simon Green’s debut album best. And while most of what the downtempo era brought forth has lost whatever magic it might have had, “Animal Magic” still is an enjoyable album.

There’s hardly anything to groan about, but the album does start with one of those moments as it opens with one of those “And now Ladies and Gentlemen…” intros – I’d bet one of my “Animal Magic” albums that Mr. Green would roll his eyes at this himself today. But at the turn of the millennium this was sort of what you did, and we don’t deduct too many points for a cheesy fifty second intro.

Today, we know him as a pretty seasoned live artist touring with a formidable band and talented vocalists. But back in 2001, this was a studio project, and Simon Green’s advantage over all the other downtempo artists clearly was his great talent as a composer, musician and producer. His beats were still sort of hip hop inspired but clearly more intricate, he always had a great touch adding layers of instruments and arranging things to create his very own mood and aura, and he always created simple and catchy little melodies.

Not that there was any singing though. In the early days, vocals were little snippets that came from the sampler, more ornament than serious contribution. Interestingly, most of these elements were on the list of more or less all of the downtempo producers of the time – Green was just that much talented and had that much more substance.

Probably that’s because contrary to other folks he is able to let samples of instruments not smell like samples, they remain instruments, even when they are looped into arpeggios as the guitar in “Kota” or the sitar in “Terrapin”. He never picks a cheesy sound and he always knows how to stay organic in its use – and the result is always a good piece of music rather than a cleverly constructed track.

You just find it hard not to love it. “Terrapin” is just completely lovely, and it comes across in such a shy and humble manner, you feel like you need to turn up the volume a little more to let it tell its lovely little tale. It’s a timid but warm little hug, and that’s hard to escape. You can’t not like it, really, just like “The Plug” with its classy bass theme, lovely e-piano and clever melody, complete with lavish strings towards the second half of the track.

It’s an album full of good ideas, sometimes waltzing along as in “Shadowtricks”, sometimes gently rumbling through variations of Hip Hop as in “Gypsy” or “Sugar Rhyme”, and sometimes just floating high above downtempo cliches as in “Sleepy Seven”. On a different part of the musical map, Green is a master of the same trick Jason Swinscoe perfected with his Cinematic Orchestra, where everything passes through samplers and still sounds like the product of truly talented musicians.

And it’s not all strictly downtempo. “Silver” is almost a class of its own, driving forward without ever breaking into a sweat, propelled by a drum pattern that is pure genius. I remember when I first payed this in my favorite bar and the owner’s head immediately turned towards me, asking what I was playing. Luckily he spends more than the usual three and a half to four minutes and gives us a couple of wistful breaks.

This is an album that doesn’t have a single weak moment after minute one. It’s civilized and dynamic, classy and curious, excellent entertainment and in its niche a class by itself. Even two decades later, we understand the magic of this beginning.